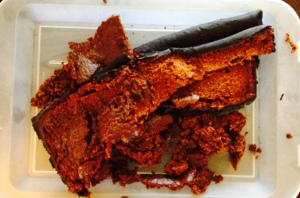 I woke up this morning and decided it would be a great idea to make brownies for breakfast. Not because I’m a super mom, but because I really wanted brownies. I knew when I had only half the vegetable oil I needed that they may not taste as good since I substituted the other half with olive oil, but my craving could live with that. I had exactly two eggs left so I very carefully took them from their carton- I am not a cook and when I do, I’m rather clumsy about it. Slight modification aside, all the ingredients made it into the bowl, mixed and poured into the appropriately sized pan. Here’s where things get a little auspicious.

As I said before, I don’t cook; I do what the box or my mom tells me. In fact, my husband does the cooking. Gray often asks at the end of the day if daddy is coming home from work to cook for us- God, I hope so. Obviously I don’t need any extra challenges in the kitchen, so the fact that the stove has not worked properly since we pulled it out and cleaned behind it has made me that much more averse to cooking anything in it. The temperature dial is no longer calibrated properly or something because it burns hotter than the sun when it’s set at 200 degrees and burns everything in five minutes. I don’t know why I thought I could use that oven unsupervised…oh yeah, craving. I was sure if I just watched it closely that I could have my brownies with the benefit of having them in half the time. Then I decided to get really domestic and start some laundry while the brownies cooked, then my son woke up as I was loading the dishwasher and, well, five minutes went by and I started smelling my brownies go from, scrumptious to burning in the matter of a few seconds.

I pushed my still groggy son out of the way, slid on some laundry and made it the stove. I pulled out the brownie pan and tossed it on top of the stove, smoking. Damn! I didn’t want the house to reek of burned brownies so I grabbed them and started running towards the door to get them outside. Unfortunately my mutant stove made the pan so hot that it was burning through the towel I was using to carry the pan, and… yep, I dropped the pan in the living room, completely upside down. Now I had upside down brownies on the carpet, a half awake toddler wanting to be cuddled awake and the washing machine had started with the lid open and only half filled with clothes. I threw the pan out the door and watched as my craving cooled on the unvacuumed carpet. I grabbed the lid to the brownie pan since the brownie pan itself was now laying in the yard and used a spatula to scoop the humpty dumpty brownie off the floor. Now, all the kings horses and all the kings men may not have been able to put humpty together again, but they weren’t pregnant with a serious hankering for eggs.

Now my son is snuggled on the couch under a blankie and watching Disney Jr, the washing machine has been properly filled, the demon stove is resting quietly for now and I am enjoying my lump o’ brownie with a slight after taste of olive oil and only an occasional hair.